Can you quit smoking and then smoke from time to time without falling?

The answer is clearly NO to the vast majority of cases … but why … because for: “dopaminergic sensitization”
Let’s say that all drugs, but also natural actions such as food, sex or social relations have a clear effect on the pleasure circuits, the brain’s reward. These circuits are located in the limbic system of the brain and highlight the nucleus accumbens, amygdala and hippocampus.
When we find something pleasurable, a meal we like for example, dopamine is released and its level increases in these structures. And dopamine is responsible for feelings of pleasure neurotransmitter. Once we had enough and we are satisfied the level of dopamine decreases again and we no longer keep eating pleasurable.
Well then drugs, including nicotine also activate this by releasing dopamine reward circuit. But even if we are tired of smoking dopamine levels do not return to normal levels but are sensitized to the dopamine. 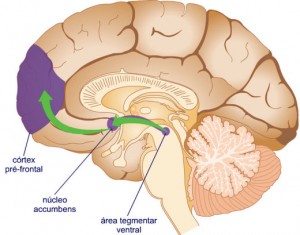 Say is a constant demand for dopamine by these brain circuits which makes us want what makes dopamine levels go up again and so we return to smoking a cigarette soon after finishing the previous one.

Furthermore, if the next cigarette smoke no dopamine demand increases over time and the smoker begins to feel “monkey” of snuff. That monkey brain is the demand of more nicotine to satisfy the levels of dopamine in the reward circuit.

If a smoker gets quit and get right. Implying that the mechanisms of brain reward return to work well in the absence of nicotine as a cigarette again is very likely that this reward circuit that remains in a fragile situation due to the action of nicotine on him in the past, is again and again descompensar malfunction if no nicotine.

That is due to dopaminergic sensitization of the past when the person was addicted to nicotine, the mechanism of regulation of dopamine in the reward system of the brain has been “touched” and suffice some nicotine to destabilize and addiction appears again.

In summary, if the quit my brain gets back to work well without nicotine everything will be fine until we finish it nicotine again and if I do it is virtually certain that the brain will ask nicotine to function well and thus become the desire of smoking.

Therefore it is not possible to quit smoking and then from time to time without falling.

And the fragility of this mechanism is chronic dopaminégico reward an ex-smoker and no treatment to fix it and leave it exactly as it was before being altered by a drug like nicotine in the present case.

Obviously there are other brain circuits involved in addiction, such as the prefrontal cortex, but the core is exposed in this summary.